Inside, you will find a page dedicated to the shows with technical files, photos and promotional videos.

You can see the puppet construction and manipulation workshops that I teach, then contact me using the contact form.

Created in 2020 by and with Valentina Valentini.

Synopsis : Pulcinella, in order to conquer his fiancée Teresina, is determined to sing her a song. But lots of characters interfere and try to stop him: his lifelong ennemi Don Pasquale, the dog, the death, the policeman, the priest and the executioner. It ends in a tragicomic way and love with Pulcinella always triumphs!

Created in 2017 by and with Valentina Valentini

Synopsis ... She proudly carries her box, which she imagines light and empty. But surprise !!! From the bottom of the box a strange character who seems far from stupid is turning out. Stoic, the little man nishes his walk, he feels as if everyone were looking at him and then all of a sudden, an object appears. What is it? Is it this woman behind him who tries to trick him? but quickly a complicity settles in... and then another object appears and then another one... But our hero hasn’t found yet what he had been missing so badly...

Teaser of the show The Pulcinella’s song 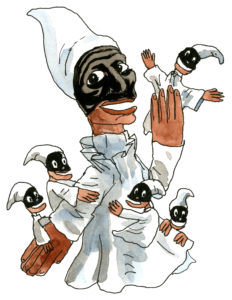 Pulcinella and Carnevale, long-time friends, become rivals for the love of Teresina. Teresina chooses Pulcinella, but Carnevale does not see it that way and decides to disguise himself as a woman to lure his friend and rival away from his beloved. While Pulcinella is under his spell, the guappo Gennarino also falls in love with Carnevale dressed as a woman. A succession of events leads to his death. He arrives in hell and convinces the devil Farfariello to help him take his revenge. As a result of this plan, Pulcinella becomes pregnant and gives birth to five Pulcinellini.

Meetings with the public to make and manipulate wood puppets

Entering the magical world of puppetry, a multidisciplinary art that touches on writing, acting, music and fine arts, allows to free expression, develop an imagination and express it.

Each participant makes a puppet from various recycled materials. The emphasis is on expressiveness, lightness and manoeuvrability. An introduction to the puppeteer's game and a demonstration of the work carried out with the characters can be scheduled in the final sessions.

A quotation is available on request via the  contact form.

Puppets made by the participants of the workshop held at the Accorderie du Grand Belleville.

Puppets made by adults with disabilities from Simon de Cyrène organization

Puppets made by the participants in the TAP (Temps d'Animation Périscolaire) workshops in schools in the 17-19-20 arrondissements of Paris.

Meetings with families to make, manipulate and create a papier mâché puppet show.

The children first choose which type of character to build: animal or human. Then, with recycled materials, they model, decorate and dress the hobbyists to finally manipulate them behind a castelet through improvisation exercises. Workshop can be carried out in 1, 2 or 3 sessions depending on the number of participants.

Marottes made by the children of the association Les Petits Poètes, Paris 75010

She was born and raised in the south of Italy. One day in 1998, she took the train to Paris to partecipate in an international demonstration against the war in Kosovo. She’s been living in Paris since then. There, she discovered drama and street arts festivals, cinema, photography, music... She enrolled at Paris 8 University to study cinema and she completed her studies with a Master’s degree. Meanwhile she trained in creation of puppets, working regularly on various artistic projects such as the making of an animation film with articulated characters Kitsch Kong and the direction of a puppet workshop for the town of Paris.

After graduating as a film programmer, Valentina Valentini worked in various fields as video editor, cameraman, in charge of astronomy film collections at the Observatoire de Paris and then documentary movies on art at the Centre Pompidou.

During her free time, between two films, two editing, she continues making puppets.

One day in 2015, she decides to leave the professional world of cinema to dedicate herself entirely to the puppet arts. She joins the team of puppeteers of Manipulés du lundi at La Nef Manufacture d’Utopie, then goes to Naples to meet and train with Bruno Leone, before working with Diego Stirman for a year on the technical direction of his shows and the construction of latex puppets.

In 2017 she produces her first puppet show Imbroglio with the help of director Anne Carrard of Les Anges Mi-chus and of Diego Stirman’s scenographic design team.

In 2018 she joined the annual professional puppeteer training course provided by the Théâtre aux mains nues where she discovered the work of various artists such as Samuel Beck, Alice Laloy, Mathieu Enderlin, Claire Heggen...

In 2020 she created the show The Pulcinella’s song, inspired by the canvases of guarattelle, traditional Neapolitan puppet showses and is the artistic director of the puppet theatre company Les abougazelles cent têtes.